The 2014 FIFA World Cup was the 20th FIFA World Cup, which staged in Brazil. It was the second time that Brazil staged the competition, the first being in 1950, and the fifth time that it was held in South America.

It was the 4th time that Iran qualified for the World Cup. I flew to Sao Paolo prior to the tournament to cover the latest from Team Melli at the World Cup. 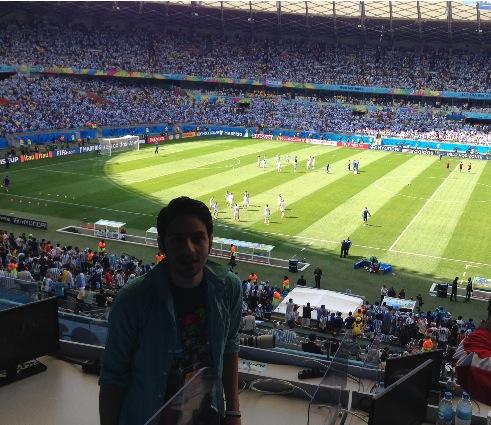 I managed to cover all training sessions, press conferences and flash interviews of Iran national team. Iran were drawn in Group F of the tournament alongside Argentina, Nigeria and debutant Bosnia & Herzegovina.

In the first match Iran managed to keep their first ever World Cup clean sheet after a goalless draw against Nigeria. Despite a fantastic performance against Argentina, Iran lost to the Albiceleste only with Lionel Messi’s stoppage time wonderstrike.

The third match against Bosnia was a must win game for Iran but a 3-1 loss confirmed the elimination of the Persians and record Bosnia’s first ever win at a World Cup.

In addition to covering Iran’s performance at the World Cup, I managed to have a couple of interviews with a couple of renowned football characters as well as Arsenal former head coach Arsene Wenger and Manchester United former defender Phil Neville.